We have been here before and this time plan to go to a beach. But first we head to St Patrick’s Cathedral for Mass on the 1st Sunday of Advent.  It is a handsome limestone building with beautiful purple and pink stained glass and warm dark wood inner ceiling. It’s in good shape. We arrive early and the man at the door in a wheelchair says welcome back. We see that the pastor Fr. Charles Dominique is a Dominican. We expect to be in for a good homily.

As we wait for Mass to start we nod to a few other passengers here and the church fills up. A pigeon (or is it a dove?) flies through one open window over the altar and out another.  It’s a young crowd with plenty of youth and children. There is a smallish choir made up of young women and men.  There is a group of VIP visitors upfront with someone taking photos of them. The Mass proceeds. Fr Dominique is a high energy preacher with a great sense of humour.  ‎90 minutes later the celebration ends. Fr Gives a 30 min homily to be watchful and ready while waiting for the coming Kingdom of God made incarnate in Jesus Christ’s birth, spiced up with jokes about daily happenings and being stopped by the police for a bumper sticker. At the end, he asks all the visitors to stand and we are thanked for coming. We sing happy birthday to a few people. He let’s the VIPs rep address us (Crédit Union League 60th anniversary). It was a great if long celebration.

We walk a few blocks and cross the street. I look the wrong way (they drive on the left here) but survive it.  We hit the beach on Carlisle Bay for a few hours. Bigger waves‎ and sand whiter. It’s very hot and crowded. We walk into downtown which is quiet and take a cab home with a freindly driver. Not as inviting as Grenada but another good experience for sure.

Barbados was the centre of the sugar trade in the 17th and 18th centuries. Rich English bought up all the land. They brought in slaves from Africa, sent sugar to New England and then rum to Africa for more slaves‎. In 1700 Barbados generated more trade than all other British colonies combined!! There was a slave rebellion at one point that was eventually extinguished. The slave trade ended in the early 1800s but not slavery itself for sometime after. It was not until 1951 that universal suffrage was proclaimed and independence in 1971 I think. Bit of a bleak history here. 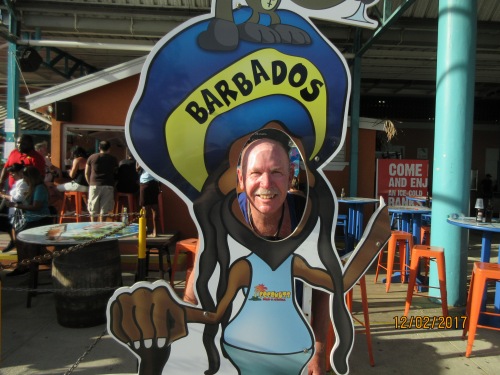