How Did Fort Myers Get It’s Name? 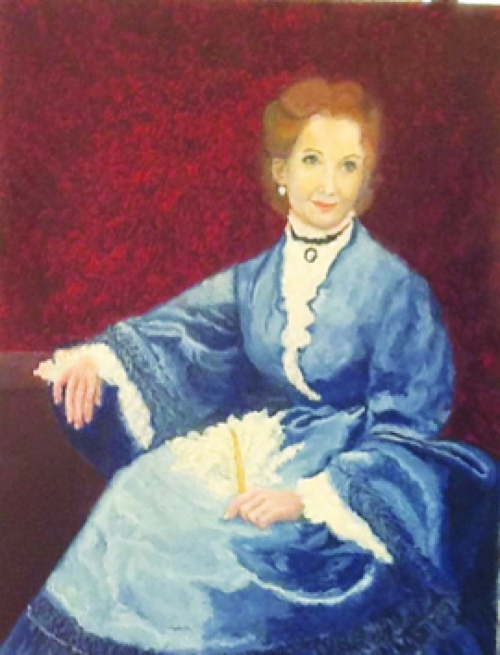 Fort Myers is a gateway to the Southwest Florida region and a major tourist destination within Florida. The winter homes of Thomas Edison (“Seminole Lodge”) and Henry Ford (“The Mangoes”) are a primary tourist attraction in the region. The city is named after Colonel Abraham Myers.

It was the love of a woman that got Fort Myers its name, but that same woman’s tart tongue effectively ended its namesake’s career.

The name originated as sort of an engagement gift from General David. E. Twiggs, the commander of Fort Brooke in Tampa, who in 1850, was in charge of a fort on the Caloosahatchee,  yet the Jewish Confederate who received it, never actually visited the place. 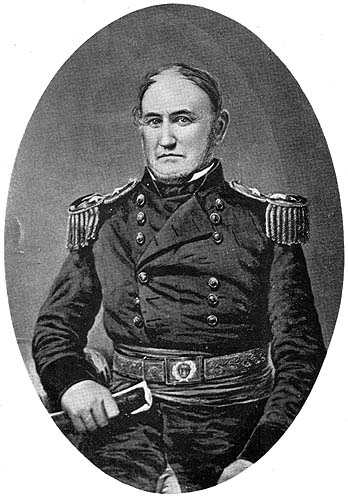 Twiggs was not the kind of man you would like to invite home for dinner, yet he commanded the respect of his men. Staff officer, Abraham C. Myers born 1811 in Georgetown, S.C. (he did however like) an 1833 graduate of West Point and the scion of a prominent Southern Jewish family, Myers was the son of an attorney, and a descendant of Moses Cohen, the first rabbi in Charleston, S.C.. He’d fought with distinction in the Seminole and Mexican Wars before becoming the Chief Quartermaster of the Department of Florida. Twiggs’ daughter Marion fell in love with Myers, after meeting him in Texas. In honor of his future son-in-law and to make his daughter happy, he named the fort for Myers. The couple married in 1853 when she was 15 and he was 42. 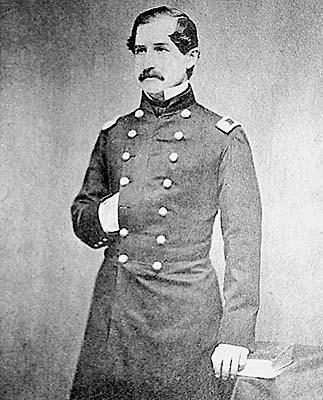 Confederate President Jefferson Davis also liked Myers who had joined the Confederate Army in 1861. He appointed him the first quartermaster general and Myers remained in that post until 1863 when Myers had some “problems.”

Marion caused the problems, as she was “quite the gossip.” Beautiful with “a wicked tongue” and her father’s temperament.

The final blow to Myers’ career came when Marion publicly described the olive-skinned Varina Howell Davis, the president’s wife, as a ‘squaw’.

Historians are unsure whether the colonel apologized to Mrs. Davis, yet Davis replaced Col Myers in 1863. In 1865, the Myers family left for Germany and returned in 1876.

Florida became a US Territory in 1821, the ensuing wave of settlers asked for protection from the native Seminoles. Fort Myers was built along the Caloosahatchee River, one of the first bases of operations during the Seminole Indian Wars. Fort Myers was named in honor of Colonel Abraham C. Myers, the son-in-law of the commander of Fort Brooke in Tampa.

The Southernmost battle of the Civil War, a skirmish between Northern and Southern troops occurred across the river in 1865 and is reenacted annually at the North Fort Myers Cracker Festival.

The fort itself was disassembled, and some of the wood used in construction of some of the first buildings in what would become downtown Fort Myers. No more than ten families lived in the original town when it was platted in 1876.

Our daughter, son-in-law and 2 grandsons came for a visit over the weekend.  Tim has a conference in Orlando and brought Michelle, Wyatt and Jackson here for 3 days.   What a great time we had! 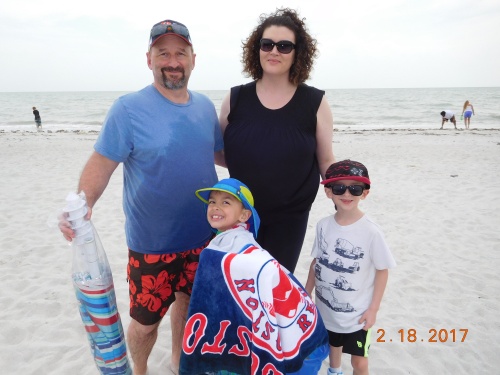 They arrived from Ottawa at the spiffy new SW Florida International Airport.  After hugs all round they picked up a rental car, installed booster seats for the boys and we were off.  After checking into our condo we headed for Bowditch Park on Fort Myers Beach.  It was a cool evening and we did not last until sunset.  Boys loved the beach. 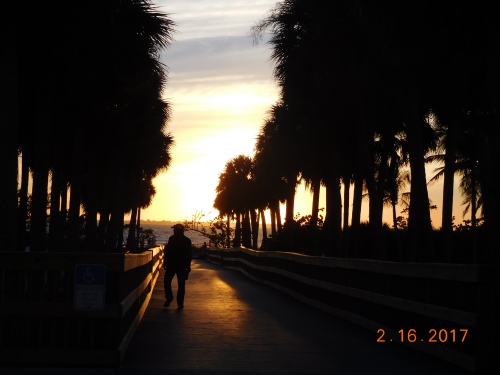 We headed for Salty Papa’s Shrimp House for dinner.  There was a lineup and we waited 30 min+ for a table.  Settling in we ordered from the extensive menu.  The boys were hungry so we asked that they bring all the food right away.  There was a bit of a wait.  The waitress was very gracious, apologizing for the delay as they were extremely busy.  She gave us 2 giant pieces of key lime pie on the house.

The next day was devoted to shopping at the Sanibel Outlets , the dollar store and a few other places.  The boys got a free haircut at the new Twincutz barber shop next door.  In the PM we went to Bunche Beach.  Next Tim and I played a great round of golf at the beautiful Whisky Creek course nearby.  That evening we picked up some great pizza and wings from our local go-to bar Buckett’s. 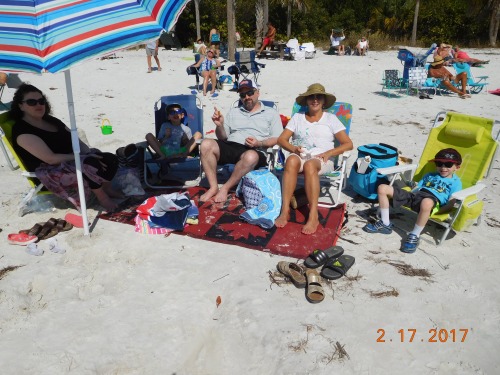 The bird Wyatt asked me to take a picture of

We were exhausted and all slept 9 hours.  The third day we headed for Lakes Park.  The family went on the miniature train ride.  Then Jackson and Wyatt went jumping on the big blow up slide.  This was the highlight of the visit for them.  With much shrieking and laughing they worked up a sweat climbing and sliding down the 35 foot high structure.  No damage was done and we all had a great time watching them whooping it up. 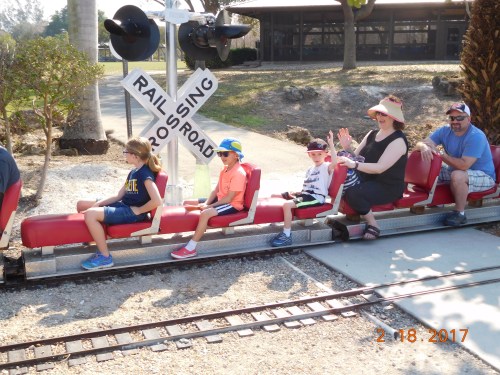 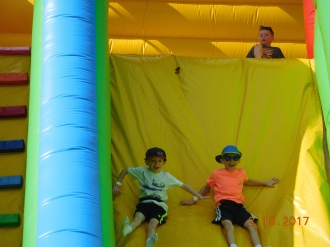 We then headed for Sanibel Island and spent an agreeable few hours on the beach shelling.  At the brand new Doc Ford’s we had a sumptuous sea food dinner. 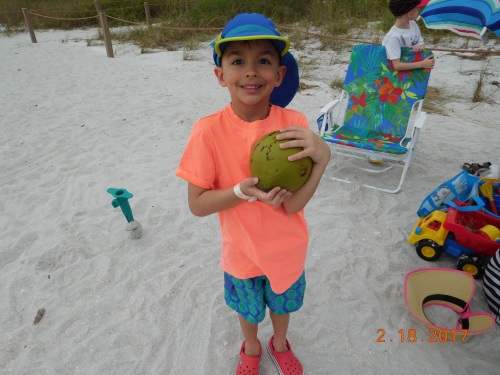 Jackson with his prized coconut 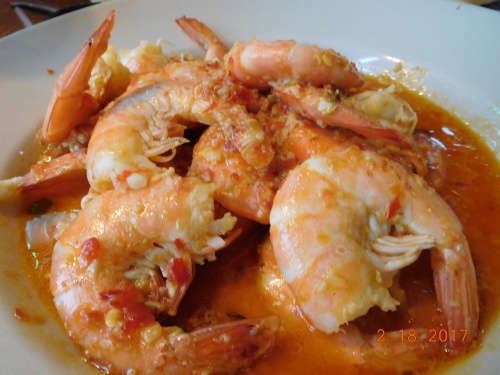 We were exhausted and you guessed it, we slept 9+ hours again.  In the morning after breakfast and packing up, Michelle, Tim, Jackson and Wyatt headed off for more shopping and on to Orlando.  These are the moments family memories are made of. 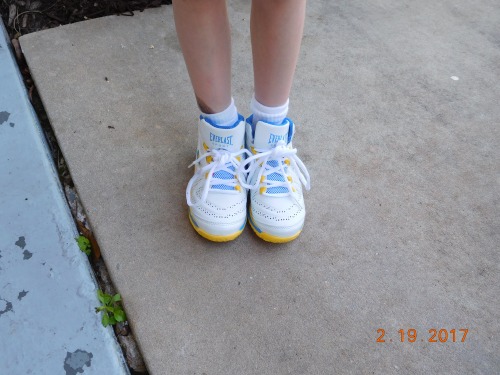 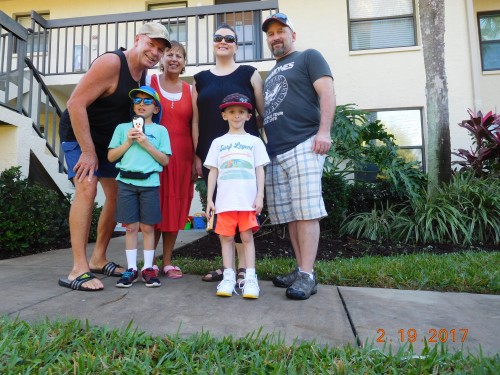 An Outing to Ave Maria

Ave Maria, Florida is a catholic university town established by Tom Monaghan, philanthropist and founder of Dominos’s Pizza.  We had been there before but decided to make the trek again with our friends the Clarke’s.  It is located about 50 km inland from here. 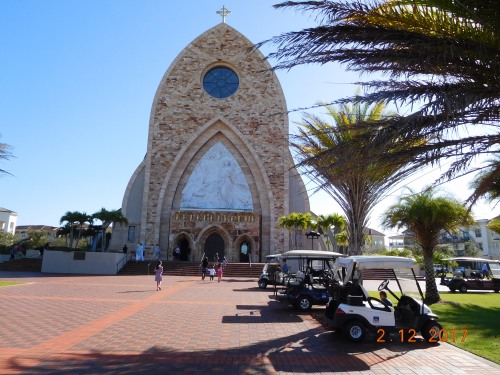 The church is the principal attraction.  It is a neo-Gothic design with flying buttresses outside and beautiful structural steel arches inside. 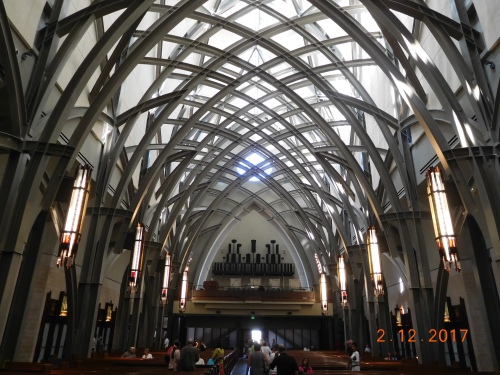 We enjoyed the mass there.  The congregation is very youthful being mostly university students, staff and their families.  There was a wonderful children’s choir in the loft who sang their hearts out.  Pastor Fr. Cory Mayer gave a great homily on being attentive to God’s call.  I was able to pick up a copy of Robert Cardinal Sarah’s God or Nothing in the bookstore.  All in all a great outing! 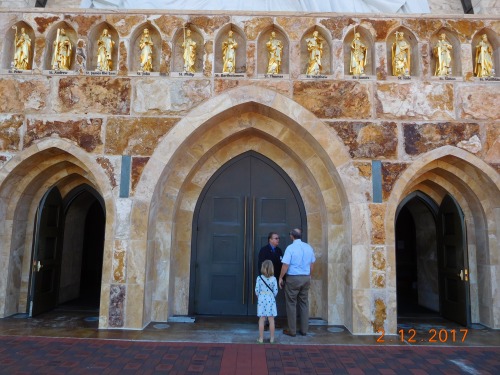 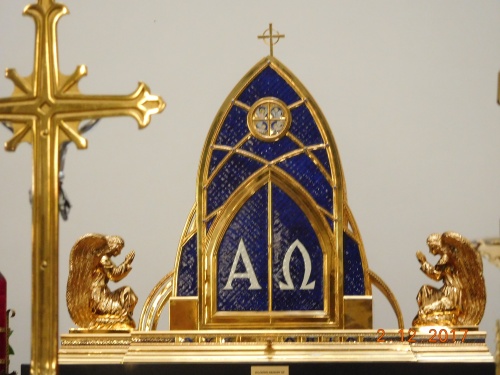 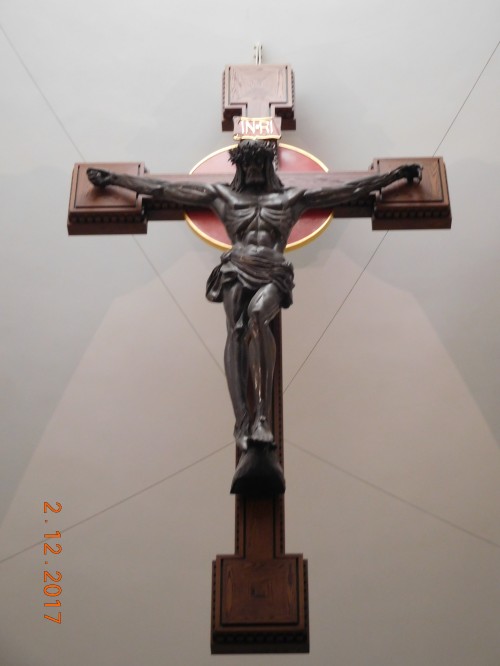 Crucifix above the altar 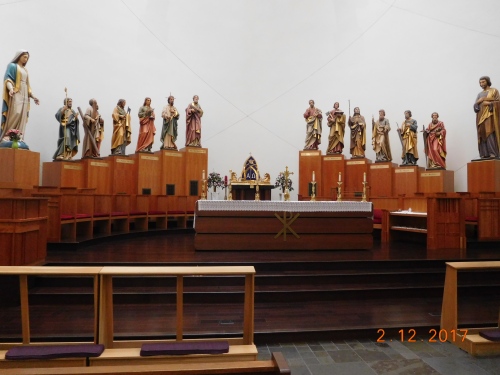 Things have not changed much since our last visit.  There is a golf course, Publix, housing and fountains throughout.  A growing world-famous Catholic community. 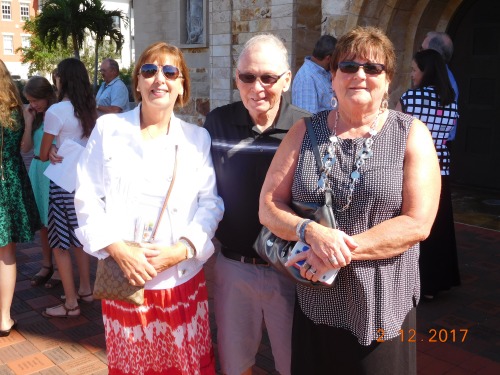 With Glenn and Betty Clarke 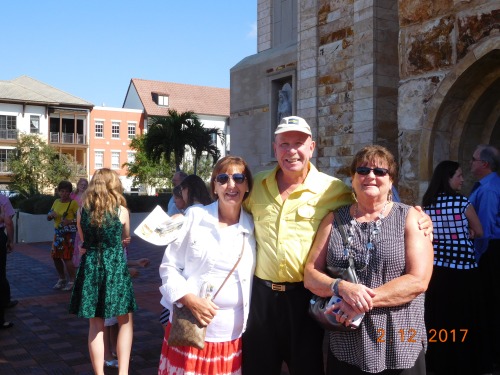 The Peculiar Birds of Cape Coral

Our go-to beach this year has become the little one at the Cape Coral Yacht Club.  It is 10 minutes away, has free parking and the bridge toll is only $2.  They have a pier, an outdoor restaurant/bar and live music on the beach some days. 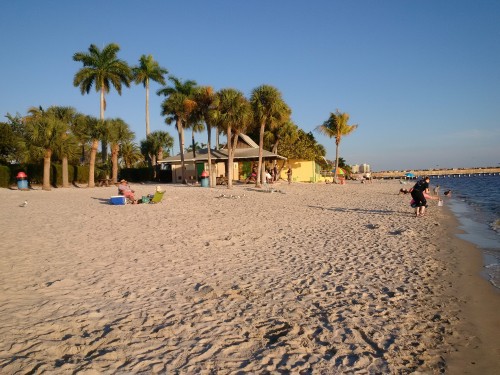 The birds there are wild!  One day we were eating lunch when a gull flew over my shoulder from behind and knocked the sandwich right out of my hand.  The slightest rustle of a bag attracts their attention and 2 or 3 of them are soon eyeing your snack craftily.  They are a nuisance for sure and you feel intimidated when you eat anything.

However, the other day we heard some really loud screeching, and squawking in the high trees behind us.  I looked up and saw dozens of green parrots roosting and flying from branch to branch.  Turns out these are monk parrots, originally native to South America.   They have established themselves as feral communities in various southern U.S. areas. 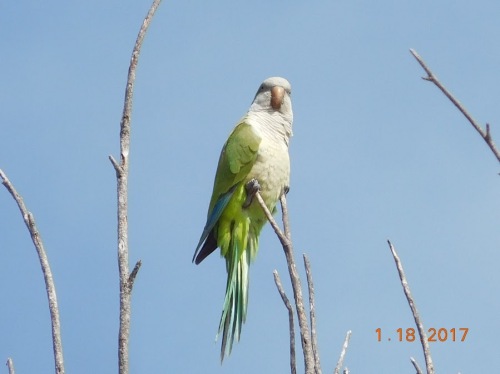 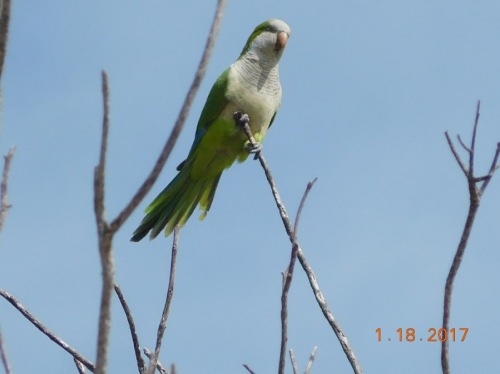 Beautiful birds. And they don’t dive bomb you on the beach!