I used to be a liberal but…

.. now I am not so sure.  This has nothing to do with Justin Trudeau or Kathleen Wynne. 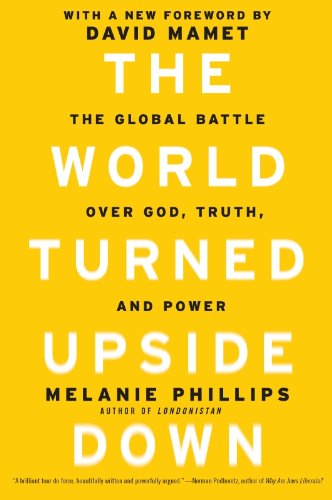 I just finished reading The World Turned Upside Down – the Global Battle over God, Truth, and Power written in 2010 by Melanie Phillips. Who is Me‎lanie Philips?
She is a British journalist with a long history. Jewish by birth she was a “liberal” who was criticized about her views on science, gay rights, climate change, Palestinian rights, feminism, multiculturalism and Islam – all non negotiables of the left. She is now seen as right-wing.  You can read about her past and present here.
I came across this book in the surplus bin at the library just before fleeing winter, and brought it along.
Her thesis is freedom is giving way to coercion in the West.‎  People now assume that to be secular is to be enlightened and to be religious is to be irrational.
Objectivity that once allowed us to be sure of who we are as individuals and as a nation, has all been eroded away.  Our culture has been upended by moral and cultural relativism.  This is the fruit of the Enlightenment where individual reason becomes king over the Church and frees us from hierarchical structures.  But political correctness reigns supreme based on a culture of victim-hood and promoting minority rights.  The majority culture is wrong and needs to apologize.  Reason and democracy have been hijacked by the forces of the left which cannot tolerate dissent.
Truth is now subjective – whatever I want it to be.  I interpret the world from my viewpoint and that is my Truth.  Yours is whatever your experience says it is for you. We are no longer a society built on the solid bedrock of Judeo-Christian theology. We have abandoned belief in the supernatural in the name of science, materialism and naturalism, all darlings of the left.  Yet science divorced from religion has not been able to answer the  basic questions like why we are here or where we came from.
I found her arguments very plausible in explaining how we got into the mess we are in today. She is particularly critical of the failed Church of England and reminds us that the religious goal of Islam is world domination. Israel is in the forefront of confronting Islam and has a right to defend itself.  It is in our interests to support it.
Furthermore, Britain is in the forefront of western societal decay and with garbage piled high and feral children roaming the streets  – Londonistan.

What is chilling is that 6 years later we have “Brexit” – Britain has indeed had enough of the leftist European Union pluralistic, all cultures are equal rhetoric.  America too has had enough of Obamaism and Clintonism and elected Donald Trump to make the U.S. great again.  Authoritarian type governments are gaining power in Poland, Spain, Turkey and elsewhere.  Is Canada next?  Are we immune?

While I did not read every chapter of this heavily documented work, in the moment I give it a strong 4.5 out of 5 stars for making me think enough to reassess my values.