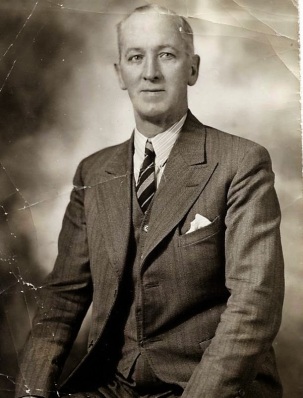 He was a shrewd investor.  I found shares of a dozen penny mining companies and a chemical company in the files which I will check with my stockbroker about. (Subsequently these have all been deemed worthless lol.)  In 1923 he also lists owning 3 vacant lots in Laurentide Park fully paid for.  His estate was complicated with several life insurance policies and other blue chip stocks valued at $29k.

He was honoured for 25 years service with Canada Paint  with a luncheon at Queen’s Hotel Nov 5, 1927.  On Oct 14, 1952 he was again honoured with a dinner for 50 years service at the Windsor Hotel.  Here is the program inscription:

“Sydney M. Ward joined the Canada Paint Company in October 1902 as office boy.  In 1903 he was promoted to Invoice Clerk.  Then in 1904 he was made Pricing Clerk. His advancement to the position of Chief Clerk followed in 1905. Then in 1910 a new department was created, the Sales Promotion and Advertising Department, and he was transferred to it.  Later in 1912 he was assigned a Sales Territory.  Promotion followed quickly and in 1914 Mr. Ward was appointed Trade Sales Manager of the District of Fort William east to Nova Scotia.  In 1917, following the death of the General Manager, Mr H.W. Aird, Mr. Ward was requested to take over temporarily until a new appointment was made.  in 1918 when the company decided to enter the export field, Mr. Ward was given the assignment of opening up a new territory which included Bermuda, West Indies, British and Dutch Guiana, which he handled very successfully.  He continued as Sales Manager to District Manager and on the death of our late general manager Mr. J. H. Hawkins, August 1952, Mr Ward was requested to take over temporarily as Acting General Manager.”  A bit bizarre because his mom was Jane Frances Hawkins Maxwell Ward.

Dies at age 69 in September 1954.  “A funeral service was held this afternoon in the chapel of Jos. C. Wray and Bro. Mountain Street, for Sydney M. Ward, former district manager of the Canada Paint Compnay Limited, who died at the Montreal General Hospital.  He was 69.  Mr. Ward served 52 years with the company, where he started as office boy in 1902.  He advanced through the order department, sales territory and sales management to the post of district manager he held at the time of his death.  He is survived by his widow, the former Mary Finnie, a daughter Mary, and two sons Charles and Sydney, a sister and five brothers.  Burial will be in Mount Royal Cemetery.

There are several letters of tribute from Canada Paint on hand.  In one a D.A. Whittaker thanks his widow Mary Ward for all Syd’s dedicated service.  He explains that $4,500 in owed salary and commission as well as an additional sympathetic allowance of $3,500 will be paid to the estate shortly.  Apparently, as he explains there was no ongoing survivor pension benefit paid in those days.
The letter mentions discussing this with C.K. and that C.K. is heading off to Central America.

I likely met him when I was 3 years old in 1953.  Mom shipped me off to stay with them when Kim was born in 1953.  I cannot recall anything other than one standing joke mom would tell.  Everyone was heading out the door for an event and no Pop.  Mary called out “Pop what are you doing?”  A grunt like voice emerged from the bathroom “Oh nothing.”  Mom also mentioned that she had been selected to go to London for the Royal Jubilee celebration in the 1930s sometime.  Syd overruled and decided to send C.K. her younger brother.  Not sure why but Mom was not pleased at the time.

Sydney was obviously a very successful man with lot’s of friends, family and business connections.  Makes me think we are blessed to be descended from him.  His spirit lives on in us for sure.

One response to “Sydney McCullough Ward”