She came to Canada as a child in 1907 or 1908 at the age of 10 and her father died a year or so afterwards. Her mother Elizabeth had to bring up 5 children with no social agency help in those days.  Mary’s childhood in Montreal must have been tough.  As a result she grew up to be self-reliant and concerned about others.  She became a loving wife, a diligent worker for the church and for the Red Cross (she knit constantly) and was a volunteer at the Catherine Booth Hospital a few blocks west of Cavendish Blvd..  This hospital opened in 1925 as a maternity hospital named after the wife if the founder of the Salvation Army.  Her Canada Social Insurance No. was 218-260-115.

Together with Sydney, 13 years her senior, they had 3 children Mary (my mother)(1921-2011), Charles (C.K.)(1922-1969) and Sydney (Bud) 1927-2008?).  It seems that had a good family life.  Syd had solid employment and advanced through the ranks at Canada Paint for 52 years.  Seems Mary met her husband to be there when she worked as a secretary.  As a family they would travel to the Laurentians, Cape Cod and Pine Lodge near Bristol, PQ for summer get aways.

She attended Knox Crescent Kensington and First Presbyterian Church, 6225 Godfrey Ave. Montreal.  Was active in various church activities.  Here is a link to a brief history of this church: http://presbyterianrecord.ca/2011/06/01/knox-crescent-kensington-and-first/  I guess it is safe to say that Mary’s mother Elizabeth was a women of faith and brought Mary into the Presbyterian faith.  However it is quite possible her dad William was involved in this too.  Below, Tarbush the Ward family dog: 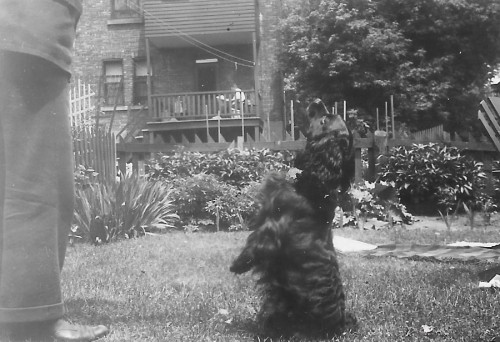 Her passport issued in 1949, says she was 5 ft., 8.5 in. tall, grey eyes and brown hair.  She went on a 2 week trip to Scotland, England and France, with husband Sydney who she called Pop.  Here is her passport photo:

I have a copy of a lovely letter (see excerpt below) she wrote my mom while on this trip in May 1949.  She says she was thrilled to see a Highland parade in Glasgow, Queen Mary in the window at Marlborough House and Henry VIII busts, all seven wives and other royalty on display everywhere they went.  Pop being of Irish heritage remarked he wouldn’t give a nickel for any of them lol!  She really loved the sea voyage!

She and Pop were shrewd investors.  Nana held a slew of blue chip and penny stock shares upon her death.  Below, 3429 Beaconsfield Ave c. 1940:

After Pop died in 1954, she sold the house and moved to 6815 Sherbrooke Street West, apartment 7 and lived there for 20 years.  She used to go to Thistle Manor, in Rawdon, PQ for many summer visits with her friend Mrs. Finlayson (Aunt Joan Ward’s mother).  Then she moved to the Griffith-McConnell Residence, 5790 Parkhaven Avenue for about 20 years.  Her will of 1969 lists son Sydney Harold Ward (my Uncle Bud) of 9 Steeple Top Road, Roayton (sic), Conn. and Mary Ward now Mrs. A.D. Morgan (mom) as joint executors as well as joint heirs along with C.K.  In an earlier will dated 1949, son Charles Kenneth (C.K.) had been designated executor in the event her husband Syd predeceased her.  C.K. unfortunately died in a car accident in 1969 which left everyone heartbroken.  Below, with son Charles c. 1944-45

On January 28, 1975 she authorized my mom Mary to be her Power of Attorney.  She suffered a series of mini-strokes in the early 80’s.  Mom brought her to Ottawa for her last 5 years. We  celebrated her 90th birthday here.  A week later she took a fall and broke a hip.  She survived the surgery but had heart failure on the third day.  I was there with mom when she drew her last breath.  Below, her 90th birthday celebration:

I remember the interment ceremony.  We all went down to Montreal by car.  It was a solemn ceremony.  Later we went to Ruby Foos for some great Chinese food to lift our spirits.

My earliest recollection of her is when I went to visit in the 1950s on Beaconsfield Ave.  I locked her out of the house when it was raining and danced around laughing as she tried to get back in.  Nasty!  Another time I took her mix master apart and that was the end of that machine.   Despite my shenanigans, she was a very loving grandmother to me, always with a twinkle in her eye.  I remember visiting her many times on Sherbrooke St. W.  I loved the park across the street and playing on the swings.  I was fascinated by the pedestrian tunnel under the street.  I can still smell the musty smell of her apartment building when you opened the front door after being buzzed in.  Her apartment was fascinating to me with all those china dogs.  The chime of the clock, that gas stove, the sounds of the traffic, the secret door down the fire escape were all amazing.

Every Christmas and birthday, she would send me a small cheque.  I remember writing letters of thanks every year which would simply say” Thank you for the money.  I put it in the bank.”

In 1973 I was working briefly in Montreal.  She invited me and 3 of my university buddies for dinner.  Well we ate at a card table in the living room.  When we finished I remember each of us saying to ourselves that we were still hungry after she had returned to the kitchen.  She was so sweet to invite us!  My most memorable time was on our way downtown one day in Montreal with her and my Mom.  I was about to get out of the car to go exploring and meet them later.  As I was getting out she halted me with “David, David!  “Yes Nana” I replied.  “Old age is for the birds!!” she exclaimed.  I thought about this for years and still do.  There were many other visits when I would take the bus downtown.  I was always fascinated by the way the driver would call out “Hatwaater” when we reached Atwater Ave.  Those were the days!

Later mom and I would drive to Montreal to visit her in the Griffith-McConnell home.  It was in the middle of Cote St. Luc.  In January everyone, I mean everyone would be wearing a fur coat. Very unusual I thought.  Although she had a 6 figure estate, one day when we there, she asked Mom if she could still afford the newspaper that was being delivered to her room daily.

After she came to Ottawa in about 1978, we saw her often.  There was amble time for son Kyle and step-daughter Michelle to get to know her.  We have several good photos together.  It was indeed a loss to loose her in 1988.  Of all my grandparents, she was the only one I ever spent time with and knew.  Thank you Nana for being there for me when I needed you.  You are still in all our thoughts and dreams.