We had the most exquisite breakfast at an auberge across the street from La Villa Danton – eggs on artisan bread toast, salad with raspberry confiture and hints of maple syrup. We then walked along the gorgeous Gaspesie shoreline enjoying the sights, sounds and ‎smells of the ever widening St Lawrence.

We left St Luce Sur Mer and drove SE across the centre of the beautiful Gaspe peninsula to the site of the Restigouche Battlefield. It was here in the spring of 1760 that the French ‎supply convoy sent at great expense to support the retaking of Québec City from the English, was totally lost. The 5 ships laden with supplies and arms were scuttled by French sailors after the British squadron hemmed them in here. It spelled the final end of La Nouvelle France.

We continued on to the outskirts of Bathurst, NB and found a delightful little motel with a heated outdoor swimming pool.  ‎We enjoyed a late afternoon swim in the sun. Chinese food for dinner and a great rest. 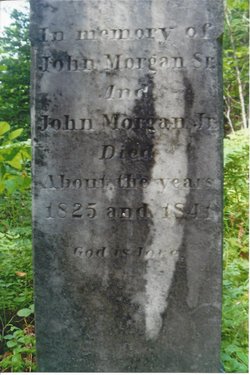 Next day we drove 3 hours to Nasonworth, NB near Fredericton. After chatting on the phone with distant cousin Brian Morgan, who unfortunately was away and not able to meet with us, Dave attempted to find the Old Morgan Cemetery‎.  After slugging thru the heavy bush by the Rusagonis Stream for 30 minuntes, he gave up. Must have been going in the wrong direction which Brian confirmed the next day. The Old Morgan Cemetery is the resting place of Dave’s great great great and great great great great grandfathers who were named John Morgan Jr and John Morgan Sr., respectively.  They came directly from Wales or possibly via the U.S. in 1781 to build a farm on a Loyalist land grant and a family dynasty in Canada.

He should have been walking this direction on the east side

We drove to Saint John our final destination and were warmly welcomed by Kevin and Phyllis. After a great dinner of salmon and shrimp, Marie’s nephew Troy and his son Tyler came over and we had some laughs. Their other son Brad lives in Shanghai, China where he and his wife teach school.  We spent a delightful evening together after a long day.