It was men like the Le Moyne brothers, especially Pierre d’Iberville, inspired by the endurance, techniques and cruelty of the Indians, who adopted similar guerilla warfare techniques by becoming even more ruthless in their lightning attacks on the English.  This integration with Indian culture, fierceness and technique prolonged the survival of New France until 1760 against much superior English odds.

In 1689 the population of New France numbered 14,000.  It’s territory consisted of Acadia on the Atlantic coast, Canada along the St Lawrence River and Great Lakes and Louisiana from the Great Lakes to the Gulf of Mexico along the Mississippi River.  It controlled such a vast territory by allying itself with dozens of Indian tribes, by having a centralized military command structure and strategically placed defensive forts. English settlers number 154,000 (a 12 to 1 advantage) in North America in 1689.  However, they are hemmed in by the French allied Indian tribes in multiple colonies along the East coast.  They rely on local militia for protection and are unable to cooperate with each other efficiently.  Their only major Indian allies are the Iroquois tribes of NY. 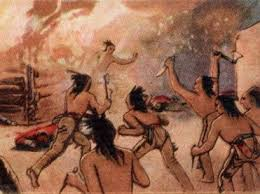 Back home in Europe, to contain Louis IV’s ambitions, England joins with the Dutch, Austria and eventually Spain and Savoy in the Nine Years War against France, known as King William’s War in North America.  In August 1689, news of this having reached the English colonies first, 1500 Iroquois are emboldened to attack Lachine just outside Montreal.  Many French settlers are killed (reports range from 25 to 250) and the settlement is burnt to the ground. 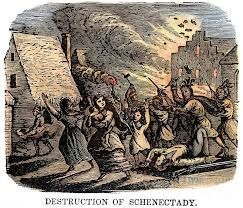 In retaliation, Governor Frontenac sends a force of 210 led by Pierre’s brother Jacques, with Pierre 2nd in command and another brother Francois de Bienville, to attack Corlaer (Schenectady) outside of Albany, NY in Feb 1690.   They catch the town completely unawares, killing as many as 60 inhabitants, taking 25 prisoners and 50 horses back to Montreal after burning the settlement to the ground.

Pierre is rewarded with a Seigneury on Bai des Chaleurs in Gaspé but quickly disposes of the land.  He is neither interested nor temperamentally suited to the life of a seigneur.  Instead, that summer he returns to Hudson’s Bay with a small fleet of 3 ships, 30 guns and 80 men.  The English traders at York Fort are ready for a fight and chase Iberville away with a ship of 36 guns.  Pierre then attacks New Severn, an outpost, capturing it and thousands of rich pelts.  He winters in James Bay before returning to Quebec and thence to France in late 1691, to prepare for the next campaign.  The goal of the expulsion of the English from Hudson’s Bay was to elude him for several years to come.

(to be continued,  with gratitude for source material from the Dictionary of Canadian Biography, http://www.biographi.ca/en/index.php )