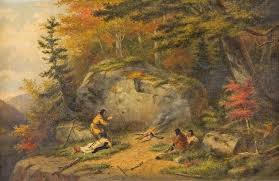 The Jesuits failed to convert the Huron to Christianity before destruction of the latter by the powerful Iroquois tribes.  They did not see any good in the Huron culture or spirituality that needed saving.  Instead they saw it as an obstacle to Christian conversion that must be undermined, if not destroyed.  They failed to see that God was already at work in the Huron and that they too were God’s children.  They accepted the failure of their mission as the will of God.

Nowadays, the missionary approach is much different.  A missionary, e.g., of the Missionary Oblates of Mary Immaculate, still goes where the Church does not go.  But first, they seek to walk with the people, get to know them, their problems and needs and only then, adapt the Gospel message to their culture, belief system and circumstance.

“The universality of salvation means that it is granted not only to those who explicitly believe in Christ and have entered the Church. Since salvation is offered to all, it must be made concretely available to all. But it is clear that today, as in the past, many people do not have an opportunity to come to know or accept the gospel revelation or to enter the Church. The social and cultural conditions in which they live do not permit this, and frequently they have been brought up in other religious traditions. For such people salvation in Christ is accessible by virtue of a grace which, while having a mysterious relationship to the Church, does not make them formally part of the Church but enlightens them in a way which is accommodated to their spiritual and material situation. This grace comes from Christ; it is the result of his Sacrifice and is communicated by the Holy Spirit. It enables each person to attain salvation through his or her free cooperation.”

So did the Jesuits accomplish anything good in Huronia?  Yes, they were taking the gospel to the world which is what Christ told his apostles to do.  For the greater glory of God, souls are to be saved from the fires of Hell through conversion to Christian beliefs.  The cause of the Huron nation destruction was not the fault of the Jesuits, but of the warring Iroquois Confederacy who were bent on increasing commercial trade.

However Christ told his disciples (MT 10:14, MK 6:11, LK 9:5) that if any place does not welcome you or listen to you, leave that place and move on.  Clearly the Jesuits did not move on in the face of obvious resistance.  Instead, they sought to undermine the spiritual beliefs and practices of the Huron.  Christ did not give instructions to his apostles like this.  Indigenous people have human rights too.

It has been almost 30 years since George Erasmus, Chief of First Nations accused the Catholic Church of having destroyed native culture, language and traditions in Canada.  As Co-chair of the 1991 Royal Commission on Aboriginal Peoples, he erupted in an an emotional tirade after a presentation by the Catholic agency, Development and Peace.

Since then we have seen many apologies from Catholic Bishops and Religious Congregations for this and other abuses that have taken place against indigenous peoples of Canada in the name of God and the Church.

Francis Jennings in The Founders of America, (1993) said that all such mission systems as the Jesuit in Huronia were intended and functioned in their various ways, to establish colonial domination over the Indians involved (p188).  David Treuer in The Heartbeat of Wounded Knee (2018), says the Jesuits were not as bad as the Franciscans and Dominicans.  Native American Trade Schools in the United States did a lot of good according to Treuer, an Ojibwe from Minnesota.  In addition to teaching trades and language skills, natives from historically warring tribes got to know each other for the first time, realized they had common interests and decided to bury the axe.

Hence much good has come out of Jesuit and subsequent missionary work and joint Christian initiatives in Canada.  Nevertheless we must not get complacent in our relationship with First Nations as the recent Truth and Reconciliation Commission and the Enquiry into Missing and Dead Indigenous Women reminds us.  Many of us harbour misconceptions, misunderstandings and mistrust of our First Nations brothers and sisters, who after all, are the original peoples of Canada.  Happy Canada Day! 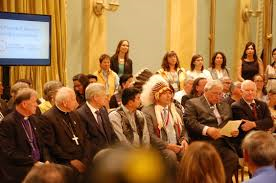