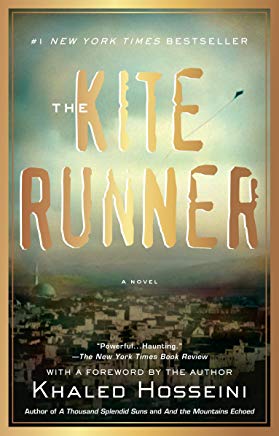 A bestseller at the time, this is a story that puts a human face on the Afghanistan conflict in the words of an Afghan born American.

It is the story of Amir, his father Baba and his half-brother Hassan. It traces Amir’s privileged upbringing in an upscale neighbourhood in Kabul, starting in the early 70s. Baba, a lofty Pashtun, is a wealthy merchant and great man who raises his son after Amir’s mother dies in childbirth. Amir is great friends with Hassan, the son of their servant, a lowly Hasara. They fly kites together in competitions until one day, Hassan is sexually abused by the neighborhood bully, while unbeknownst to anyone,  Amir looks on, too fearful to intervene. He never tells anyone what happened to Hassan and carries this guilt for years.

Amir and Baba go about their lives as everything collapses, escaping to Pakistan and then emigrating to California. Years later Amir, now a successful writer,  is called back to Afghanistan to rescue Hassan’s son from an orphanage. It is only then that he finds out that he and Hassaan were actually half-brothers, so he in fact is the half-uncle of little Sohrab.

After much violence and drama, Amir brings Sohrab to America where he too starts to fly kites.  An interesting read but a little too contrived a story in my view. I found myself wishing it would end about 100 pages sooner.

I liked Baba’s character development. He did his duty to everyone, built a orphange and was successful in business. However he never told Amir and Hassan about their brotherly relationship.  Family reputation and avoiding shame is everything in Afghan society. I liked the information about the Pashtuns who are culturally superior to the Shiite Hasaras. The references to the Soviet invasion, communist takeover, Northern Alliance regime and finally the Taliban tyranny, complete with beard police (all men must sport long beards) and public stonings, was indeed educational and gruesome.  I would have liked more information on this though to better understand the context in which the story is unfolding.

I found the series of Afghan names, types of food they eat and references to the Koran a little vexing to remember. Sometimes I could not remember who was who.  Afghans do like lamb kabob and spinach.

I would rate this book 7.5 out of 10 simply because it was a little overdone. I note Khaled’s later books (this was his first) seem to have been rated slightly higher. Nevertheless a  good read about a far off place that I had a little understanding of and would like to learn more about..

2 responses to “The Kite Runner”