I am an on again, off again sports fan.  About a week before our Baltic cruise, I noticed a posting from a guy named Jack on the Cruisecritic roll call where people meet up beforehand.  He was desperately looking for someone to accompany him on an evening out in Saint Petersburg to experience World Cup fever.  I cautiously responded that I was intrigued and potentially interested.

In Russia you can’t just walk off the ship and wander around.  You either have to have a tourist visa ($$$) or have signed up with an accredited Russian tour company who provide you with a blanket visa while on one of their tours.  As it turned out, we had both already contracted with Alla Tours to see Saint Petersburg so it was easy for me to join him in this private tour.

Not sure what to expect, Jack said he had experienced World Cup fever before and said I would love the excitement of the fans in the streets, bars, jumbo screens etc..  Marie and I tend to enjoy soccer or futebol as they call it elsewhere.  So Jack and I headed out the first evening we were in Saint Petersburg for our world cup fever tour.

Our tour guide asked us what we wanted to do.  I wanted to see the new stadium built specifically for the world cup in Saint Petersburg.  We could not get into it but we stopped for a photo.  It is known as Krevtosky or Zenit Stadium, cost $1.7millionUS and seats some 68,000.  Would love to have gone to a game there but would you have to apply to FIFA many months in advance to get a ticket.  Morocco and Iran were to play here the following night.  A ticket costs from $90 to $150US but also provides you with a “fanpass visa” entitling you to go anywhere in the country for 45 days.  Pretty cool. 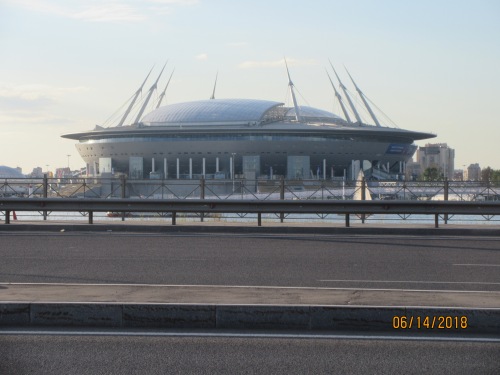 We sauntered into a bar.  Before we sat down, I warily took a picture of everyone and they cheered!  Good start I thought.  We ordered some beer and food and were enjoying ourselves when 2 Russians at the next table noticed us came over to offer us some vodka and to have a toast.  It does not get more local than this I thought!  One of the Russians was a navy captain as had been Jack, so we all connected around that topic.  The vodka actually tasted good!  It is ordered in shot glasses or in a larger glass container.  You drink it straight down and follow it with a fruit juice chaser. 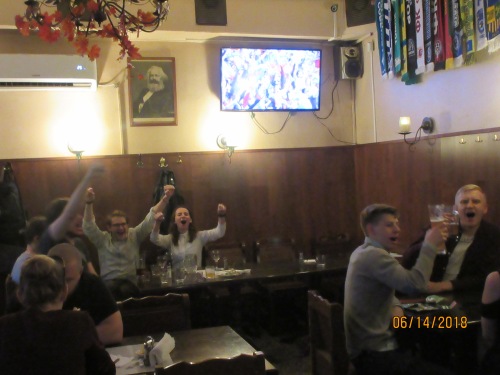 Jack disappeared outside for a while to chat and I continued chatting with my Russian friend and other fans as they came by.  It was soon time to head out to the streets and we said our goodbyes.  As we left the sidewalk in front was crowded with people chatting and having a good time.  A couple of young Russian men raced by with their flag, their team having just defeated Saudi Arabia.

We walked a few blocks down Nevsky Prospect and joined in the fun.  Fans of Morocco and of Iran were running down the sidewalks and chanting and singing out their country’s praise with large flags. We high-fived each other and everyone smiled and cheered.   We were all one in our love of futebol and our home nation.

The next day we saw the Fanfest zone where they have the jumbo screens and non-stop fan celebrations to which you need a ticket.  This was truly a memorable world experience!

Towards the end of the cruise we met Jack again with his lovely wife Carmy for a drink.  It was a fitting way to say goodbye after a great time together.  We made tentative plans to travel together again sometime.  As I write this, Russia has just defeated Spain to enter the quarter finals.  Go Russia Go!  However, perennial favorite team Brazil is also in the running.  Thanks Jack for the intiative to arrange this fab tour.