Women as Reflection and Completion

In a spirited, energetic and passionate talk, Imam Dr. Mohamad Jebara took us on an educational ride through the key role women have played in Islam religion and Muslim society on a historical basis.  He is resident scholar at Ottawa’s Cordova Centre.  The centre is committed to making the world a better place through inter-faith dialogue that inspires all people to work together.  He was the lead off speaker in what promises to be a very enriching lunch and learn series at the Galilee Centre in Arnprior, entitled Faith and Inclusivity: The Gift of the Other.

First we had lunch – and what a delicious lunch it was!  An authentic Syrian meal including spiced chicken, rice, kale, salad, Turkish delight followed by Arabic tea.  It was prepared to perfection by Karyma Nafea, wife of Abdel who is from Aleppo and on the staff of Galilee.  We learned that Turkish delight was actually first created in Damascus some 6000 years ago and should really be named “Syrian delight”.  The memorable meal was authentic mid-eastern with wonderful spices and colour. 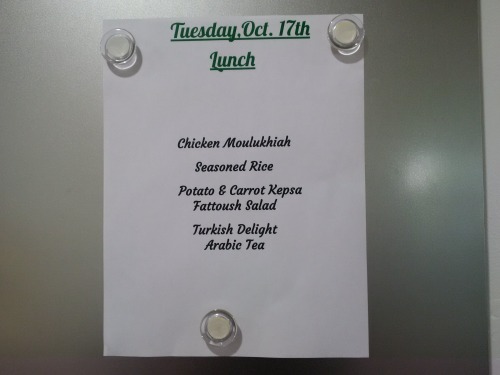 After welcoming us by chanting a 1000 year old Arabic greeting, Mohamad explained that he would be telling us the answer to the question ” Are women in Islam incomplete and unable to define themselves as fulfilled?”  There are many words for “woman” in Arabic.  The one he was using today was “imra’ah” which means mirror or reflection.  I groaned to myself as I was 1 of only 3 men in the 15 member audience.  “What kind of topic is this for me?” I wondered.

Using colourful images and expressive gestures, Mohamad went on to explain the long important role women have played in Islam.  Starting with the Prophet Muhammad’s upbringing, he introduced to us 5 different women who had nurtured the Prophet and inspired him to achieve great things as his mentors and protectors.  He continued with the history of many other Muslim women who had been chief magistrates, founders of universities, scholars and muftis (archbishops), during the golden years of Islamic society from the 8th to the 13th century.

At a time when the rest of the world, from Greece and Rome to India and China, considered women as no better than children or even slaves, with no rights whatsoever, Islam acknowledged women’s equality with men in a great many respects. The Quran states:

“And among His signs is this: that He created mates for you from yourselves that you may find rest and peace of mind in them, and He ordained between you love and mercy. Certainly, herein indeed are signs for people who reflect.” [Noble Quran 30:21]

“Women complete men and men complete women.  They are equals.” Muhammad explained.  So what happened?  Why do we have such visible inequality of women in Islam e.g.,  the “mahram system” that can effectively make a woman a prisoner in her own house?  The destruction of 12 million Islam books during the Mongol invasion (13th century) and the Crusades (11th to 13th century) ended the golden years and extinguished education particularly for Islamic women.  Other cultural changes that have been confused with religion, have relegated Islamic women to inferior status.  Culture informs religion. Most Muslims do not know their own rich history.

We in the west think that we are much wiser having empowered women in our society.  Not so fast.  Just look at  as the Hollywood meltdown and the #Metoo campaign currently underway I thought.  Muhammad finished with:

“A successful society is one that empowers women.  Empowering women empowers us all.”

Wow, we have just been treated to a rich Islamic fruitcake I thought.

2 responses to “Women as Reflection and Completion”

Casual Notes Along The Margin