This passage from Romans was the second reading at this past Sunday’s Mass:

This is in the past tense, right?  I thought my salvation would not be fully decided until the second coming of Jesus Christ.  i.e., in the future.  What is going on here?

I was raised in the Presbyterian faith and hence this passage would seem to speak to predestination: Faith in God is a gift of God and there is nothing you or I can do to effect our own salvation.  It’s up to Him alone and furthermore, He has already decided long before we were even born.  Now in the midst of continuing to work out my own salvation in the Catholic faith, I am curious: what does the Catholic Church say about the meaning of this particular reading from Paul’s letter to the Romans?

We were up in Cormac, ON at the annual St. Ann Pilgrimage for the outdoor mass.  Pembroke Bishop Mulhall was our celebrant.  In his homily he discussed the Gospel reading in Mathew but did not address the Catholic interpretation of the quoted passage from Romans.  The fact that it was very hot outside and a big crowd, was likely a factor in deciding not to go into this teaching, which would take extra time. 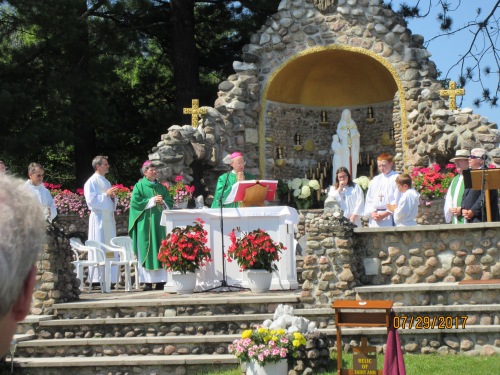 On the surface it would appear Paul is saying that God decides in advance who he will call (to conversion), whom he will justify (by removing the guilt and penalty of sin to make them righteous) and who he will glorify (give eternal life to). i.e, it is predestined by God so there is nothing we can do in our lives about his decision.  Do we have free will or not?  Do  our actions in life contribute to our salvation or not?  Are we saved through our faith alone or through a combination of faith and good works as the Catholic Church teaches?  This is a major theological dividing line between Roman Catholics and Protestants.

Well I looked around the internet and found a number of Catholic commentaries on this passage, none of which were completely satisfactory in my view.  Then I came upon the explanation given in Nick’s Catholic Blog a few years back.

Perhaps surprisingly, he quotes a number of Eastern Rite Catholic Fathers who basically said that in deciding who He predestines to glory, God takes everything into consideration including whether someone really loves Him or not and how they go about their life.  Also for an omnisicent God there is no past, present and future as we understand it – He sees everything at once.  This explanation neatly preserves our free choice and strengthens the argument that good works do indeed matter and will be taken into consideration by God.  I like this interpretation.  Calvin it seems may have had it wrong. 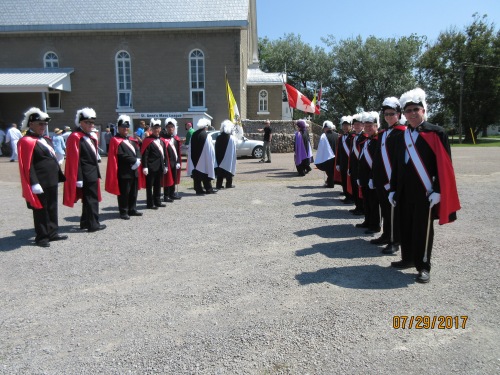 4th Degree Knights of Columbus Colour Guard (me on the right)