The Prince-bishop’s Palace at Wurzburg

The visit to Wurzburg and tour of the Prince-bishop’s Palace or Residence was one of the highlights of our river cruise this past year.  It was a glorious day with plenty of sunshine.  We had a wonderful guide, an architect-historian with a great sense of humour.  Finally it was not crowded so we had an intimate tour.

Wurzburg is a city of 25,000 in the region of Franconia in northern Bavaria.  It is situated on the Main (pronounced myan) River halfway between Nuremburg and Frankfurt.  “Don’t call us Bavarians” I remember our guide saying, “we are Franconians!”

The Wurzburg Residence was constructed over the period 1720-44 by Johan Philipp Franz and Frederik Carl von Schonburg, both Prince-bishops.  They wanted to built a palace that rivaled Versailles in Paris and the Schonbrunn in Vienna.  They succeeded.  Their masterpiece is considered one of the greatest baroque palaces in Europe!

Known for its Baroque staircase and vaulted frescoed ceiling over, it is a feast for the eyes and imagination. 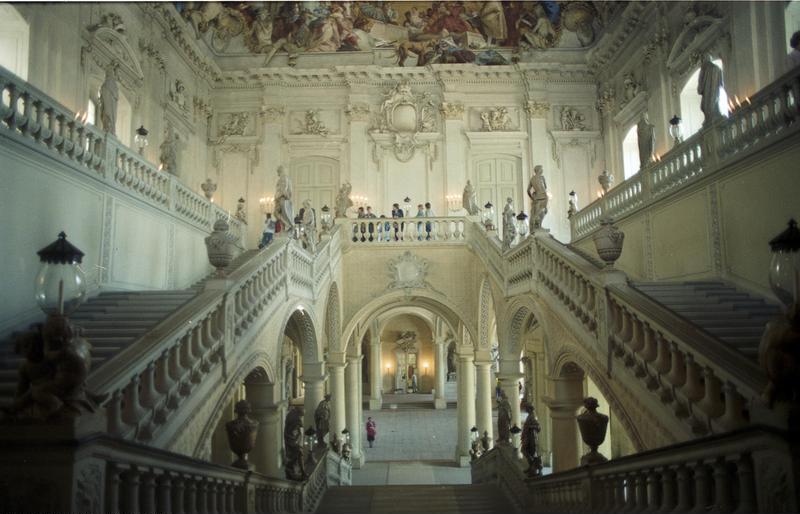 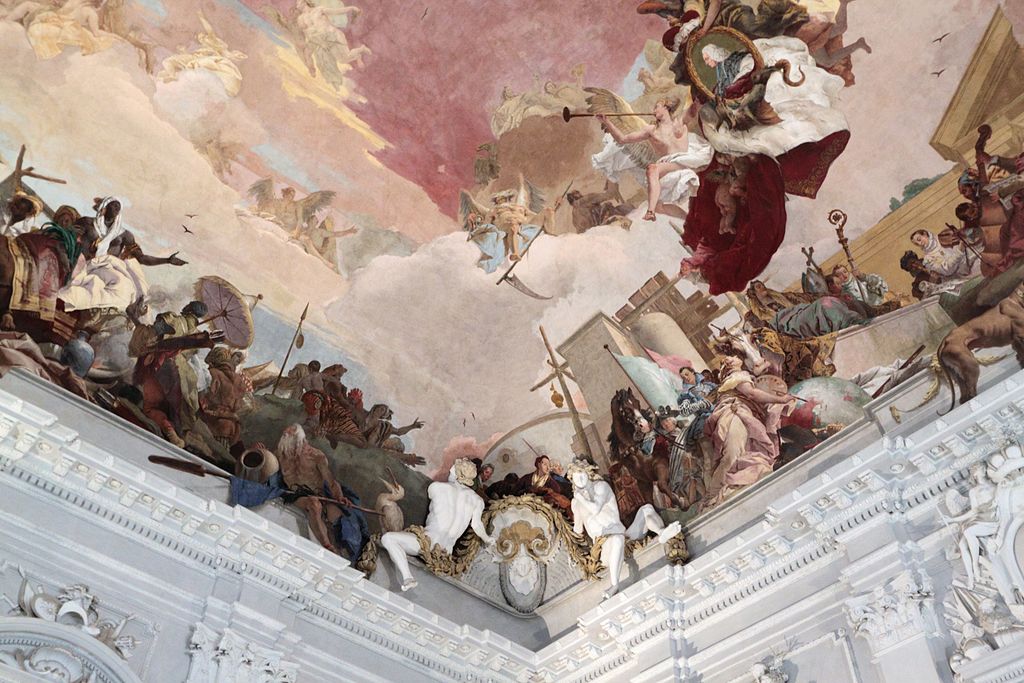 I remember too, the Room of Mirrors and the immense gorgeous tapestries that hung from many of the walls.  Napoleon slept here on 3 separate occasions and signed a declaration of war against Prussia.

Then we went outside to the beautiful and easily accessible gardens.

A prince-bishop was a bishop who was also a civil ruler of an ecclesial state – a secular principality that was also a diocese.  Prince-bishoprics were most common in the Holy Roman Empire, where many were formally elected and awarded the rank of an Imperial Prince, granting them the power over a certain territory and representation in the Imperial Diet.  The Pope would then confirm their appointment as a Bishop. With the dissolution of the Holy Roman Empire in 1806, the title became finally defunct.

The Bishopric of Wurzburg existed from 1168 to 1803, a long time indeed.  Johann Philipp Franz von Schonborn was born into a wealthy Wurzburg family in 1673.  His uncle was the Archbishop-Elector of Mainz.  He was educated at a Jesuit school, at several German universities and in Rome.  He was elected Prince-Bishop of Wurzburg by the Wurzburg Cathedral Chapter in 1719 and ordained a priest the following year.  He commissioned the Wurzburg Residence in 1720 but died of a heart attack in 1724. His brother Friedrich Karl von Schonborn, took over as Prince-bishop and continued the construction, seeing it largely finished in 1844.  He died, presumably a happy man in 1849.

On March 16, 1945 a devastating air raid severely damaged Wurzburg and the Residence.  The central building was almost totally burnt out.  Fortunately some of the furnishings and sections of the wall panelling had been removed in time escaping the inferno.  The building was completely and lovingly restored from 1945 to 1987.  This work was guided by an American who I recall, had been part of the bombing party.  In 1981 the Residence, Court Gardens and Square were listed as a UNESCO World Heritage site

We also visited the Palace of Versailles near Paris on this trip.  While it is even more impressive in scale and stature, we found it too crowded and too immense.  In the moment we much prefered the intimate scale and peaceful grandeur at Wurzburg.  Oh, oh Baroque!