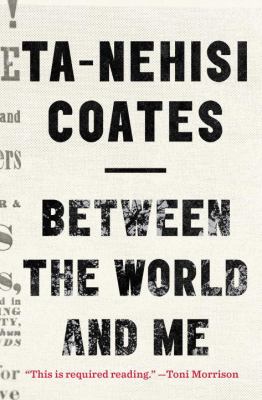 Is an award winning author who writes for the Atlantic about cultural, social and political issues affecting African-Americans.  I picked up his latest book Between the World and Me from the library.  It won the 2015 National Book Award for non-fiction.

The book is in the form of a letter to his son about U.S. history, endemic racism and the ongoing fear this invokes in black people.  He explains to his son that as an African-American male, he is in constant fear of having his “body broken” by the police.  Even if it is a misunderstanding, an error or an “over-reaction”; a black man in the U.S. today (and since day 1 of the Republic), can be beat up, shot, clubbed, kicked and locked up to die at any moment, by police.

This came as a real shocker to me. There is real terror everyday for black Americans that I as a white person cannot see, feel or appreciate. The streets are a very dangerous place.  African-Americans live in fear of their life everyday.  The gangster rap, bravado and crime we see are just a mask for real gut wrenching fear.  They have no perceived control over their bodies which can be broken at will at any time.

I was disappointed when Ta-Nehisi said “I will not retreat into religiosity” and “I live a Godless life.”  It’s as if he has no soul and his body is the only thing – which of course he does not freely have in American society.  They can never take away your soul Ta-Nehisi.  Perhaps you know this at a deep level – your wonderful prose certainly betrays to me the existence of your beautiful soul.

A little girl’s recent plea for peace, justice and en end to violence in Charlotte, NC breaks my heart:

A very gut-wrenching, touching book easy to read in a couple of days.  10 out of 10.

However, not all succumb to “the spirit of fear”.  Witness this reflection by Cardinal Robert Sarah*:

“A Godless society, which considers my spiritual questions a dead letter, masks the emptiness of its materialism by killing time so as better to forget eternity.  The farther material things extend their influence, the more man takes pleasure in sophisticated, narcissistic, and perverse amusements; the more man forgets God, the more he observes himself.  In looking at himself, he sees the deformations and the ugliness that his debauchery has encrusted on his face.  Then, to delude himself that he still shines with the original splendor of a creature of God, he puts on his make-up.  But the hidden evil is like the glowing coal beneath the ashes.

Without God, man builds his hell on earth.  Amusements and pleasures can become a true scourge for the soul when it sinks into pornography, drugs, violence, and all sorts of perversions.

There is great sadness in claiming to want to indulge in limitless pleasures, whereas the most beautiful joy is to remain simply with God, allowing him to clothe us in light and purity….

The man who ignores God and turns his own instincts into godlike standards for all things is headed for destruction.  Today we are confronted with one of the last stages of the civilization of diversion.  The alternative is simple: if mankind reforms itself, it will live, but if its headlong flight persists, civilization will become a hell.”

*Interpreting the Present Time from God or Nothing, A Conversation on Faith  (Ignatius Press, 2015).