Last night at Jazzfest, Sharon Jones, a 60 year old cancer patient from SC, sang her brand of retro ‎funk/R&B into Ottawa history.  One of her band mates announced at the end of the show “Ottawa you just got your butt kicked by a 60 year old cancer patient.”
‎
For 90 minutes she kept 6000 pairs of eyes and ears riveted on her expressive face, shimmering purple dress‎ and bald head. Recovering from recent chemo therapy, she sang one song aptly named ‘get up and get out’ which she explained is directed at her cancer.
‎
She admitted when she gets a mike in her hand and an audience in front of her,‎ she goes crazy.  Not knowing if she was going to drop dead from exhaustion, we held our breath and our seats until right near the end.
Ex gospel singer and prison guard‎, she hit the big time at age 40 and has not looked back since. The 8 piece Dab-Kings were as tight as a drum and they too looked a little amazed at Sharon’s energetic antics. Dedicated to getting America up and dancing again, they knew their place and did not overshadow.  Two accompanying female singers added to the night’s experience which was already very hot.
‎
On Saturday night we had our butts kicked as well by a virtuoso ‎Cape Breton fiddler named Anna Ludlow. With her 2 piece ensemble, she fiddled her way into our hearts at a great private concert. Wow, she sings and composes too. Tall and engaging, she also teaches the fiddle and demonstrated the subtle differences between Cape Breton and Ottawa Valley styles.  Again we sat glued to our chairs except for a daring few.
So give us another chance Anna and Sharon.  Once our butts heal from this drubbing, we will dance at once the next time, promise!!!‎ 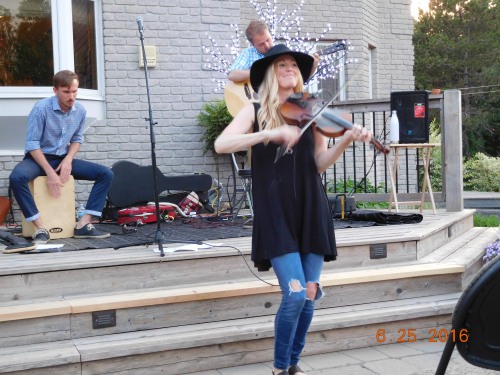 One response to “Kicking Ottawa’s ***”