We had a leisurely morning after a great sleep. Marie headed off to the gym to do her thing and Dave went swimming. Following this we took in the brunch in the Grand Dining Room. There was a quartet playing many familiar love ballads (after all it is still our 30th wedding anniversary celebration).
And yes there is something on this cruise for everyone including a bingo jackpot of $2500, trivia team competition and dancing under the stars tonight.
We disembarqued in Salvador, Bahia at 2PM. After some free wifi, we walked into town to find a bank machine. We hopped the elevator from the Baixa (lower town) to the Alta (uppertown) for free (age 65).
Lot’s of people and tourists. Several squares filled with food and caiparinha stalls. There was loud live music playing. Salvadoreans dancing in the street. Big screen TV with 1000+ people watching s futebol competition. People were having a good time on Sunday PM.
We explored several old magnificant churches of colonial architecture. Gold lined chapels, crypts and paintings were amazing. We asked about Mass times. We were told there are no Masses held here any longer. These churches are museums testifying to the glorious past of Brazil’s catholicity.
We had a caiparinha in the square (cacacha (sugar cane alcohol), limes and sugar). Yum and pow! We saw hundreds of people from the blackest black, to brown and light skin. There were a few handicapped people with disformed bodies begging. We also saw a few people sleeping in the street (this can happen everywhere). There was also a significant armed police presence.
We finished the day off with a delicious steak dinner at Polo. We were seated with another couple from Ottawa by chance – go figure.
We noticed it had rained so the dancing under the stars was moved inside to dancing under the ceiling ha!
Next day Dave headed back into town. He picked up 2 black Madonna’s for Marie. Walking around he found a Mass going on in a church called Priests of the Rosario. After Mass finished, they walked to a little grotto out back praying the Rosary I think. I was given a candle to light and place. Thene we had hot lemon tea and a buttered roll. It was all so peaceful.
Having obtained some more cash, mission accomplished. One more elevator ride down for 9 cents fee!
Try to post this by free wifi and on our way now to Rio. 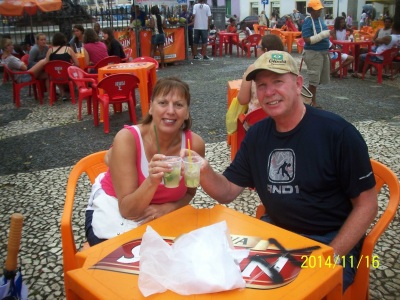 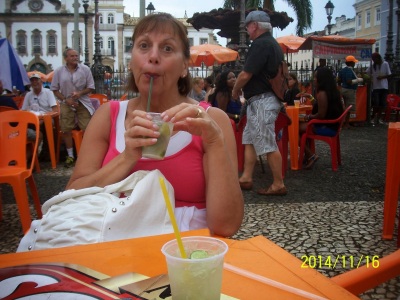 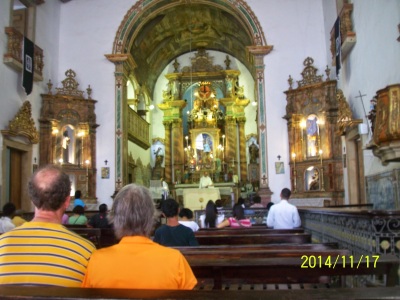 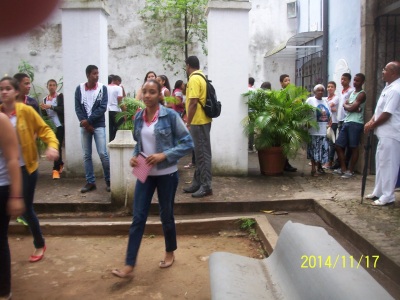 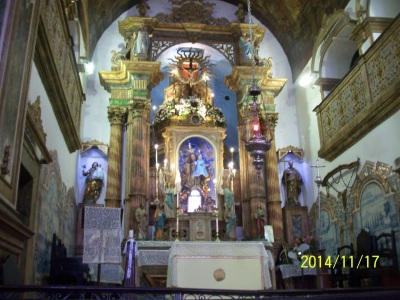