HAPPY MOTHERS DAY TO ALL MOTHERS!

Jorge Fajardo wows us with his tenor voice and expression

Last night we were treated to a cultural extravaganza chorale concert at St. Paul’s University chapel in Ottawa.  Thanks to Bro. Len Rego, OMI for making us aware of this free concert.

It was sponsored by UNAM Canada – the University National Autonoma de Mexico campus located in Gatineau, QC as well as St Paul’s and a few other organizations.  It was entitled Rencontre chorale: A une voix – One Voice choral festival. 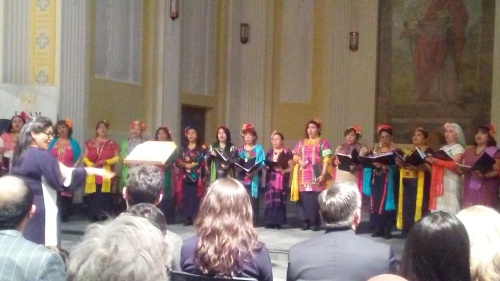 We were mesmerized by their pretty costumes, happy faces and the beautiful singing of traditional Mexican songs.  There were rolling R hoots and catcalls from the audience and loud shouts of Viva Mexico throughout.

Not to be outdone was the operatic like stage theatre of the Ensamble del Insituto Aleman Goethe from Mexico DF.  They sang and acted out with expressive faces while they chased each other around the floor bringing everyone to their feet at the end for a rousing cheer.

Then there was the Coro UNAM Canada ensemble group led by Ana Cristina Ramirez who sang one of our favorite latin American songs – Solamente una vez.  It is written by the famous Mexican songwriter Agustin Lara whose full name is Ángel Agustín María Carlos Fausto Mariano Alfonso del Sagrado Corazón de Jesús Lara y Aguirre del Pino!   You have likely heard another of his songs called Granada which the Aleman Goethe group performed for us too.

Two other francophone groups from Gatineau sang in English.  At the end, the mass choir was fantastic.  We joined then in singing Beau Dommage’s delightful La complainte du phoque en Alaska (Complaint of a seal in Alaska) and, Leonard Cohen’s masterpiece Halleluyah, which brought tears to our eyes.  We can honestly say we have not had so much fun at a concert in a long time.  We thought we were back in Mexico with a dash of Quebec thrown in.