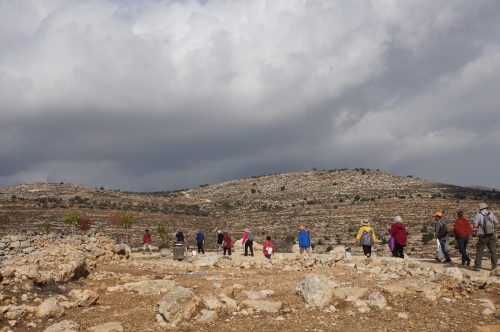 Samaria is a very ancient land situated north of Jerusalem between Judah and Galilee.  God gave this land to the Israelite tribes of Ephraim and Manasseh after they had conquered Canaan.  This region later evolved into the Kingdom of Israel.  The ancient city of Samaria itself was known as Oholah meaning “her tent”.  For many years Samaritans and Jews were in conflict with each other here.

We had the privilege of visiting ancient Shiloh and Jacob’s Well located in the city of Nablus.  Both of these sites are located in the West Bank Palestinian communities of  Samaria.

We all know the parable of the good Samaritan and Jesus’ meeting the Samaritan woman at Jacob’s well. These stories were shocking to the Jews because of the ongoing conflict and lack of trust between these two peoples.  Jews travelling from Galilee to Judea would take the longer Jordan River route rather than travel through Samaria.

As we sensed during our recent visit there, not much has changed to resolve these tensions since that time.

The whole congregation of Israel assembled together at Shiloh and set up the tent (or tabernacle) of the congregation there.     (Joshua 18:1).

Shiloh (pronounced “sheelow”) was an interesting place.  We went on a tour there led by a young man who was toting a pistol.  Turns out he was a local Jewish settler who lived with his family nearby.  Upon probing, he stated you never know what might happen around here and the gun is needed for protection. We assumed by this that he was likely  living on “unceded” Palestinian land and hence subject to potential reprisal attacks.  The U.N. has recently condemned Israel for these settlement practices.

Shiloh was the major Israelite worship centre before Solomon’s temple was built in Jerusalem, in the mid tenth century BCE.  The Tent Shrine or Tabernacle contained the Ark of the Covenant here for hundreds of years until the region was conquered by the Philistines. The Ark of the Covenant contained two sets of stone tablets on which were written the Ten Commandments.  Moses smashed the first set which God had written, because he was angered over the Children of God worshiping the Golden Calf.  He later rewrote these on the second stone set. Wow, what vivid Biblical history right in our view here! 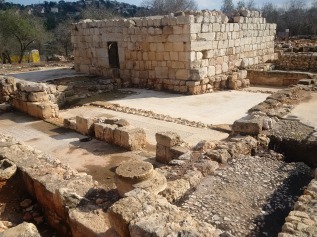 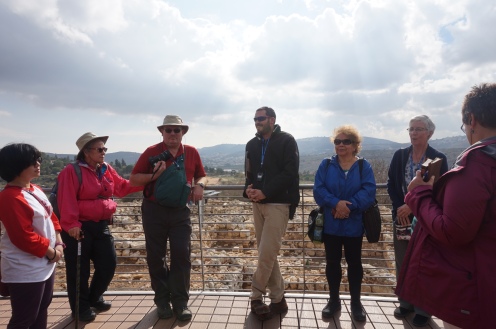 Continuing on to Nablus, a Palestinian city of 125,000, we went to Jacob’s well.  Yes, it is deemed to be the original Jacob’s Well where Jesus met the Samaritan women and shocked the disciples by conversing with her.  Then, this was in the ancient biblical town of Shechem, also known a Sychar. 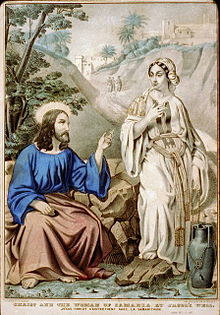 Jesus and the Samaritan Woman

The well is remarkably intact and situated in the crypt of a Greek Orthodox Church and small monastery consecrated to St. Photinia the Samaritan.  The depth of the well was measured at 41 meter.  There is a winch, small bucket and a cistern.  We all peered in and imagined Jesus talking with the Samaritan women right here so many years ago.  We marveled at the beauty of the Church above and icons as a worship service was underway. 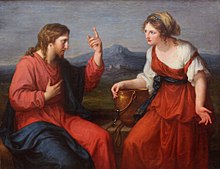 We made our way back through Nablus where everything seemed to be under construction.  Suddenly our bus pulled over and we were told we were in for a treat.  We entered a Palestinian pastry shop and sampled the world-famous Arabic Kanafeh cheese pastry in a sweet honey sauce.  Yum!  Content, we headed home to our hotel in Jerusalem after another great day, this one in beautiful Samaria. 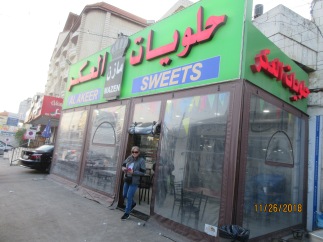